Apple users have always complained that they felt left behind by Microsoft when it came to the office suite. I know many users today, who work in PC Centric environments that go to great lengths to run the PC versions on their MAC or have a second computer for Office or even just Outlook.

Office is Microsoft’s business productivity suite and the 2016 version for Mac comes with Word, Excel, Powerpoint, Outlook and OneNote. The goal is to try and bring Apple users closer to feature parity with Windows and give business oriented Mac users the product they deserve.

Your first question might be “2016, aren’t they 5 months early?” and you’d be right. Microsoft is releasing the software early to Office 365 subscribers. Folks wanting to purchase the retail box will have to wait until next year. If you’re not familiar with O365, it has three basic flavors for business, one that includes the full office suite, one that offers cloud based email and one that offers both. If you’ve got either plan that includes the desktop apps, you can upgrade to the newest version for no charge starting today. Ask me if you need help signing up or getting the software installed.

The new design on the Mac looks good and it’s fast and responsive. For me the upgrade was seamless and easy. If you have a fast internet connection you’re golden.

The new interface supports full-screen mode and Retina displays. It does not suffer from the same resolution problems as running the PC apps on a Retina Mac where everything is either really small or really bad looking.

Programs such as the new version of Word pictured have a better, easier to understand Ribbon area that is much closer to windows. It’s more functional and the live design previews are cool.

The newest version of Outlook for Mac is night and day better than the previous version, all of the numerous issues I had with the previous versions are gone. I’d actually go as far as to say that Outlook 2016 is the best email program available for OSX. The new focus on bringing powerful design tools through styles and templates makes it easy to make great looking documents. All the complicated files I tested and created on the PC opened just fine on the Mac, and were completely editable. 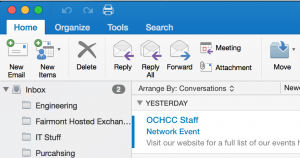 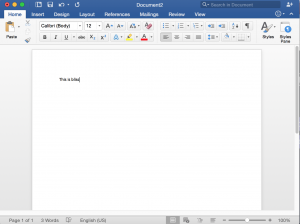 If you are coming from using Office 2013 for Windows, there are simply things that are missing and will annoy you. Despite being “Three Years Newer” there are numerous features from the Windows side that are simply missing. The handy “Insert Online Pictures” feature is missing and replaced with a pretty useless integration with Apple Photos. There is a new contextual menu that appears when you highlight an object on the PC, it’s missing on the Mac.

If you don’t use OneDrive or Sharepoint, which are Microsoft’s cloud storage platforms, then the office file integration window is nearly useless. There also seems to be no way to integrate other cloud storage platforms there, such as Dropbox or iCloud. This is somewhat forgivable on the PC where OneDrive is more ubiquitous, but on the Apple it is a poor choice. Basically your only option is to click on “On My Mac” which closes the current screen and switches to the Mac Finder. So basically if you don’t use OneDrive you’re stuck clicking through a useless window every time you want to open a file from Office. 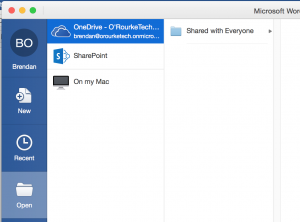 Overall the product is great, and a great step forward past the previous version. It’s a no-brainer upgrade for Office 2011 users, and if you don’t regularly use the PC versions it’s nothing but greatness with the exception of the “open file” window.  The only real decision is to wait for the full retail version or subscribing to 365. If you’re already a 365 subscriber, what are you waiting for? Get downloading!!

If you’re currently suffering with Outlook 2011 or trying to use Apple Mail with your business Exchange account, I’d say it’s worth the price of admission for Outlook alone.

Users of the PC Versions will feel the pain that features that they want are missing, however using Outlook on the Mac won’t be the horrible experience it once was.

They are getting closer to feature parity, heck, maybe in 2021 we can get all the same features.